(This article is sponsored by Kanan Sachdeva) 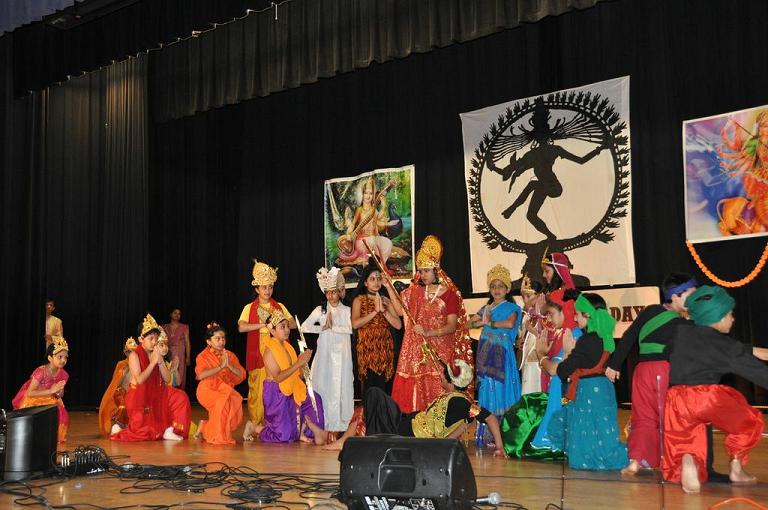 O Parvati, you who makes all desires possible, the most auspicious of the auspicious;
My refuge, Triambika, Gauri, Narayani (sister of Lord Narayana), Salutations to You.

The Governor of Massachusetts as well as the Mayor of Marlboro proclaimed May 11, 2013 to be the Hindu Heritage Day. On this day, over 2000 Hindu Americans came together at Marlboro Middle School to celebrate a rich common heritage and culture, a precious inheritance passed down from our Vedic scientists called Rishis. This is the 17th consecutive year that a team of volunteers from VHPA has organized HHD which is an inclusive event connecting almost all Boston area organizations, large and small.

The theme of this year’s mela was Shakti or energy which was in abundant display at the mela. The universe that we see and experience is none other than a bundle of energy, both packed and unpacked. The same energy when it manifests at one level of vibration is called ‘matter,’ at another level ‘mind,’ and yet another level ‘life.’ Hindu philosophy based on Vedanta and a group of Hindu works commonly known as Tantras postulate that the source of all creation, whether at the level of matter, mind, or life is one and one only. It is Shakti or energy. When that energy is in a static condition, with neither evolution nor involution, when the universe to be created is not even in a seed form, it is called Brahman. When it starts evolving into this creation, sustains it, and withdraws it back into itself, it is called Shakti. In the Hindu tradition, this energy is always pictured as a female deity, the Devi, as the consort of its counterpart male deity. Each member of the Trinity has his Shakti or Devi as his consort: Ma Saraswati of Brahma, Sri Lakshmi of Vishnu, and Mata Parvati of Shiva. Though all the female deities are called Shaktis of their male counterparts, the words ‘Shakti,’ and ‘Devi’ are more particularly or even exclusively used to denote the Shakti of Shiva, the innumerable aspects of Mata Parvati.

The cultural program organized around the theme of Shakti held the audience captive by its excellence, variety of programming, and educational content. Almost all the dance schools and master teachers of the greater Boston area were represented by their best students replete with creatively designed colorful costumes. It was a feast for the mind and the senses, keeping audience virtually glued to their seats, taking in all the production. There were bhajans and plays that enthralled the audience. This year marks the 150th birth anniversary of Swami Vivekananda. This important occasion was marked by an extensive poster display of inspiring quotes of Swamiji. The cultural program had an enactment of Swamiji’s famous Chicago address impeccably delivered by a High School student complete with saffron robes. There was a one act play depicting the life of Swamiji and his great contribution to mankind. A poster contest on Swami Vivekananda was held for all ages where two $50 and four $25 prizes were awarded to entries judged by popular vote as well as on originality, effort, relevance to society, and artistic impression.

The green rooms and the corridor leading to the stage were abuzz with excitement as the parents and coaches prepared children for the stage ensuring all costumes and make up were in place. This in itself was a sight to behold. There were families everywhere. In the 37 booths placed in different corridors there was information available on virtually every aspect of life that a Hindu American may need. There was information on VHPA August children’s camp held in Tolland, Massachusetts every year. There were booths selling a variety of children’s books, including difficult to find educational comic books and spiritual children’s books introducing dharmic concepts. The books geared towards adult readers were just as numerous. There was information on three greater Boston area Bal Vihars (schools) operating in Newton, Southborough, and Lexington, where children learn and discover their heritage while playing. Mother’s Day was the following day so it was possible to get just the right jewelry and clothes being sold in many booths. All the spiritual centers were represented who encouraged all to try different readings and meditation techniques for individual spiritual advancement.

The snacks of samosas and pakoras were most popular in the afternoon. This was complemented with chai being sold to raise funds for Support-A-Child program. Ekal Vidyalaya was well represented. The cafeteria was also a hub of activity all the time, first serving snacks and then dinner. To keep the children in the cafeteria entertained, there were educational videos played on a large screen on the Ramayana and works of Sri Krishna. Due to the larger than expected number of people, the food vendor had to requisition extra supplies of prepared food half way through the evening. Kulfi in exotic flavors was a big hit with young and old alike. Outdoors, there was kite flying activity organized for enthusiasts with kites and dori provided. Due to the large attendance, many people reconnected with acquaintances after a long interval of time. For newcomers to HHD event comes as a pleasant surprise due to the low profile advertising for it. For most families, it is difficult to participate in all the varied activities going on simultaneously. However, the nice part of this event is that this traditional get together is organized every year so there is always an opportunity to engage in different activities each year.

If you missed this annual event, then look for it next year in the month of May. For participating in the cultural program, please plan early and contact Smt. Jaya Asthana at jasthana@hotmail.com

VHP of America is a national organization which has among its objectives to unite Hindus by instilling in them devotion to the Hindu way of life, to cultivate self-respect and respect for all people, and to establish contacts with Hindus all over the world. For more information please visit http://www.vhp-america.org/ 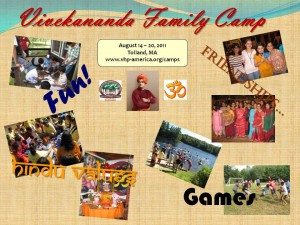 -There are two camps above in MA/below–in NJ–

Here are complete details and forms for 2011. Use these forms until we make update for 2012

Open to all children and parents.
Campers are from ages 8 to 18.
Younger children (8 years old and younger) come with their parent.