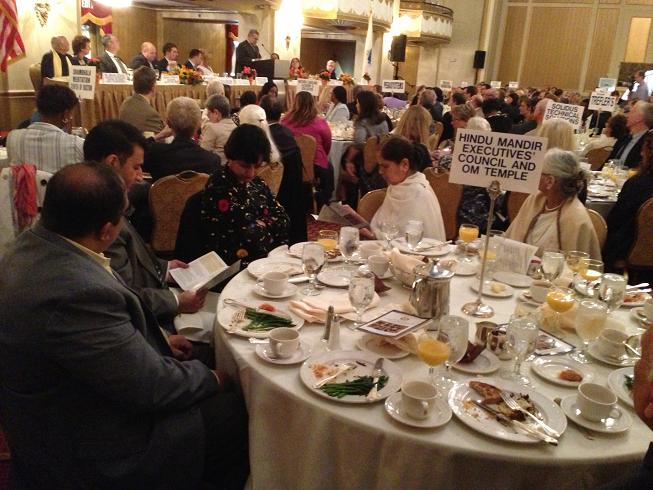 Dr. Abhaya Asthana, the General Secretary of Hindu Mandir Executives’ Conference, spoke on behalf of the Hindu American community at the 49th Annual Governor’s Prayer Breakfast held at The Boston Park Plaza on May 22, 2013.

Dr. Asthana delivered a message of peace for all. He recounted that Hindu children, upon awakening from bed and before placing their feet on the ground, bow in reverence to mother earth for bearing their weight and ask forgiveness for putting a burden on Her. Hindu tradition holds a deep respect for all beings as well as Nature for all are interconnected. When we pray for the wellbeing and happiness of all then we ourselves experience the same. Dr. Asthana’s recitation of the Shanti Path, a mantra full of ancient wisdom, was a heartfelt wish for peace and tranquility beyond earth, on earth, and within us as individuals. Om, All should be happy, All should maintain good health, All should appreciate the positive aspects of life, May None experience sorrow.  Om, Peace be, Peace be, Peace be.

The Annual Governor’s Prayer Breakfast brings together prominent business, professional, political, religious and community leaders for fellowship, music, and reflection. Sponsored by The Rotary club of Boston #7, this year held special significance as prayers were held for the victims of the April 15 terrorist attack at the Boston marathon. At the same time appreciation and heartfelt gratitude was expressed to the individuals and response teams who rushed to assist without regard to personal safety. The Boston organizations honored for their ongoing community service specifically were: Victim Rights Law Center, Fenway Health, Massachusetts Water Resources Authority, Risa S, Rosengard Foundation, Mother Caroline Academy & Education Center, Dorchester Bay Economic Development Corporation, and Wellness Inc.’s Alphabet Fitness.

Michele McPhee, author and New England correspondent of ABC news welcomed all the participants. The program was called to order by David Manzi, Chair of the Prayer Breakfast. The Hon. Thomas M. Menino, Mayor, City of Boston was unable to attend due to ill health. Rev. Stephen T. Ayres, Vicar of the Old North church of Boston read an invocation. The Very Reverend David Michael, Associate Director of Catholic Archdiocese of Boston read from the Scriptures. The Hon. Steven Grossman, Treasurer & Receiver- General of Massachusetts spoke about the Boston tragedy and the natural response of the people. Rabbi Jonah Pesner, Senior Vice President represented the Union for Reform Judaism. Imam Talal Eid, Founder/Executive/Religious Director of The Islamic Institute of Boston represented the American Islamic community. Alan Trefler, CEO  & Founder of Pegasystems was a keynote speaker and a sponsor of the event.  Dr. Abhaya Asthana represented the Hindu American community. President of Boston city Council, The Hon. Stephen J. Murphy spoke about the city’s united response to this tragedy. Shastri Carolyn L. Krusinski of Shambhala Meditation Center of Boston representing the Buddhist tradition shared words of wisdom. Before the Breakfast concluded with the closing remarks of Lucy Millan, President of Rotary Club #7, the program participants were held captivated by the soulful rendering of God Bless America sung by the soloist Daniel M. Clark.